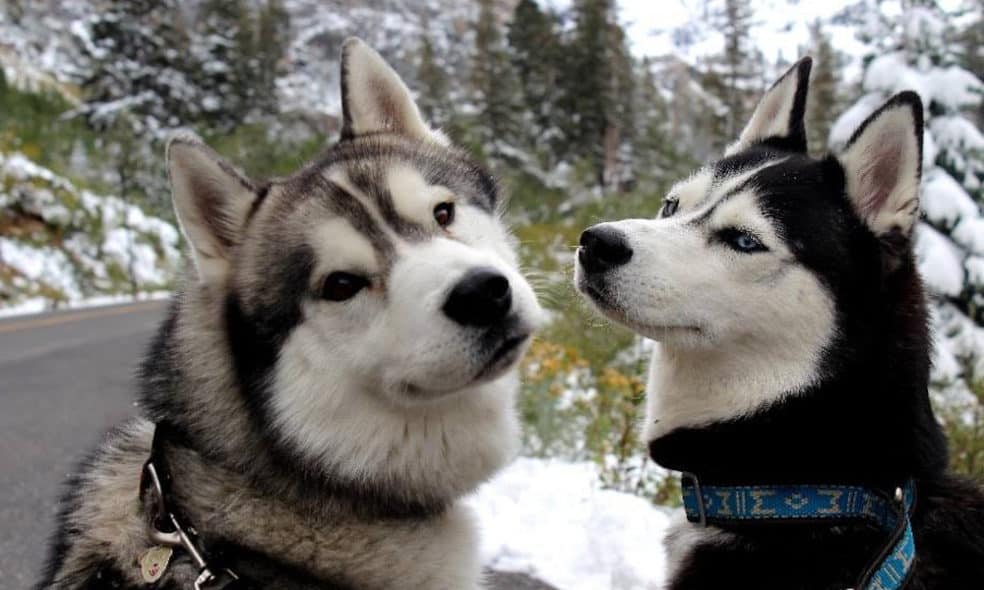 When dog mom Laura searched for a group that she and her Siberian Husky Loukia could socialize with, she never realized that her life was about to change. She found a Husky community just outside of Paris, France that organized group hikes and activities. There, she met Tom and his rescue Husky Diablo, and the two quickly became a foursome.

The couple now travels with their two Siberian Huskies, six year-old Diablo and four year-old Loukia. They recently completed a three month tour of North America – the East and West Coasts of the continental United States, Canada and Alaska – and are currently planning another extended trip for later this year.

Here, Laura shares what it’s like to travel with two Huskies, which airline they use, and how a Husky group introduced her to the love of her life. 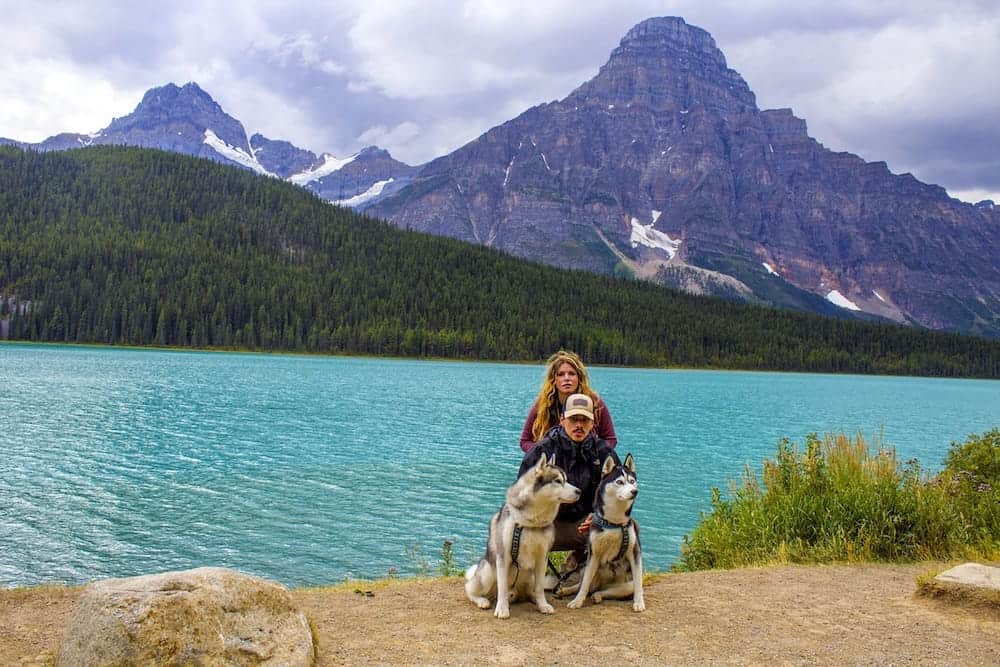 What inspired you to travel with your dog?

Tom had made a promise to Diablo to take him to the end of the world – I told him lets go.

We like to travel but we love our dogs even more so we thought it was best to combine the two.

What’s the story of how you and Tom met?

We’re often told that it’s a bit like the story of the 101 Dalmatians, but for a new generation. We were both part of a Facebook group that meets for husky walks, and when we met it was love at first sight (as much for the masters as for the dogs!).

There are a lot of husky groups in France and internationally, so when I searched for groups online I came across one that organizes rides and hikes pretty close to where I live. There are others that include all dog breeds. It’s very fun, friendly and sporty. Husky are very sporty dogs – they need to get their energy out, so what better way of doing that than in a group. It’s also a great way to socialize your dog. Unfortunately Tom is now working on weekends, and Loukia can be a bit moody, so we don’t hang out with the group a lot anymore, but we do continue to cycle, hike and race with them.

When searching for groups, some keywords for me were: Balade canine (dog rides); Husky (obviously); and Nordique dog (nordic dog). In France there are lots of groups that fit these niches. I don’t know about the rest of the world. If there aren’t, it’s time to create them! 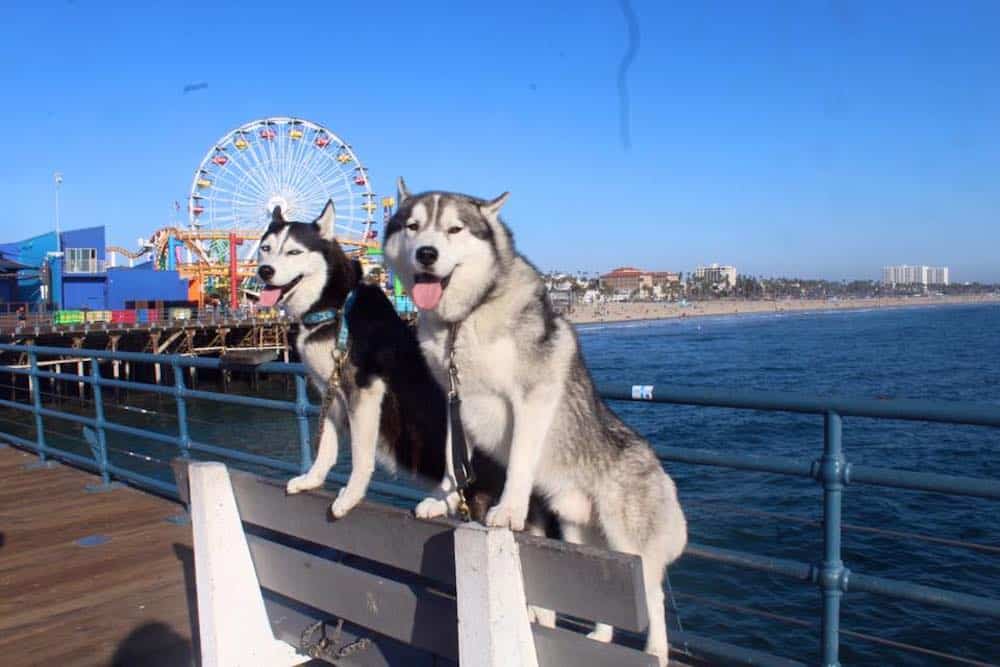 How did you prepare your dogs for the journey?

We didn’t really have to prepare them much because they are so smart. We often do sports with them, so they’re already used to being with us, and used to the car.

What is the hardest part about traveling with your dogs?

Without a doubt the moment when we had to leave the dogs on the plane for the duration of the flight – that stressed me out. But Air France was both professional and reassuring. 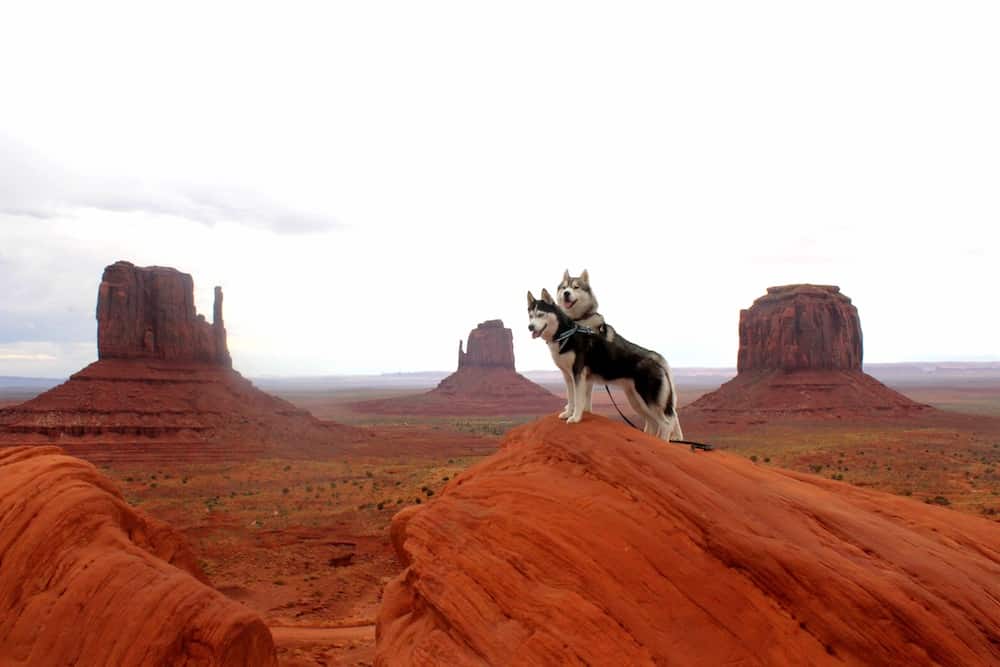 What’s the best part about traveling with a dog?

We felt safe. And even when we found that some places didn’t allow dogs, we discovered others off the beaten path that were just as beautiful.

How did your style of travel change, now that your dogs are with you?

Now it’s a lot of nature, adventure, breathtaking scenery, hiking and road trips. Before it was more beach, party, hotel and tourist activities. 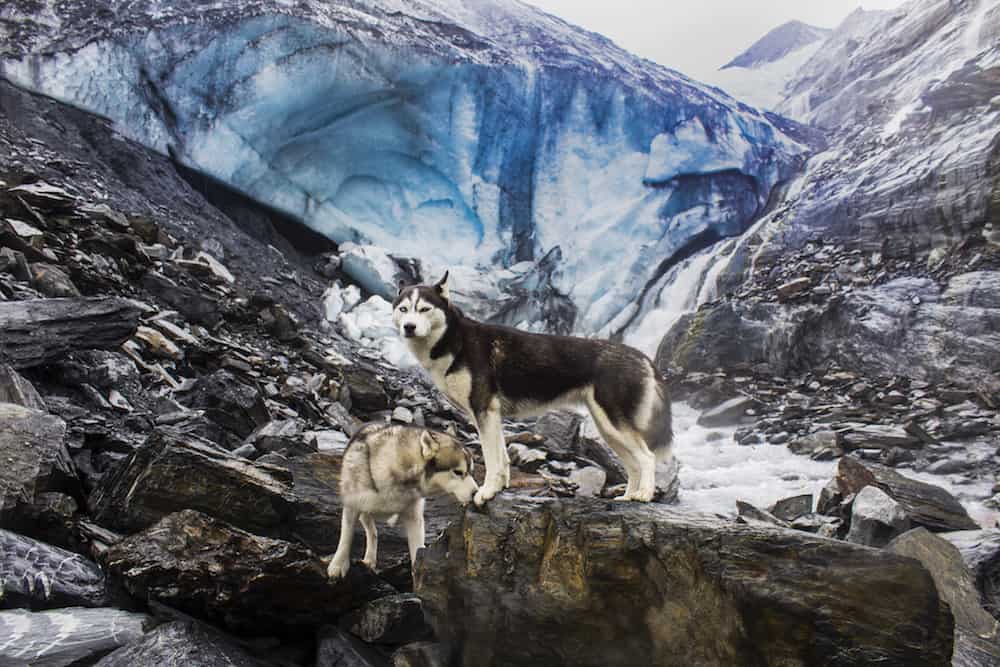 How are you finding accommodations on your journey?

We use the Booking.com app, which includes a pet-friendly filter. But we also had our car and could camp most of the time.

What were some essential items that you packed for your dogs?

Our traction harnesses and belts from Manmat for trekking, their leashes and collars, with dog tags. And some croquettes for the road. 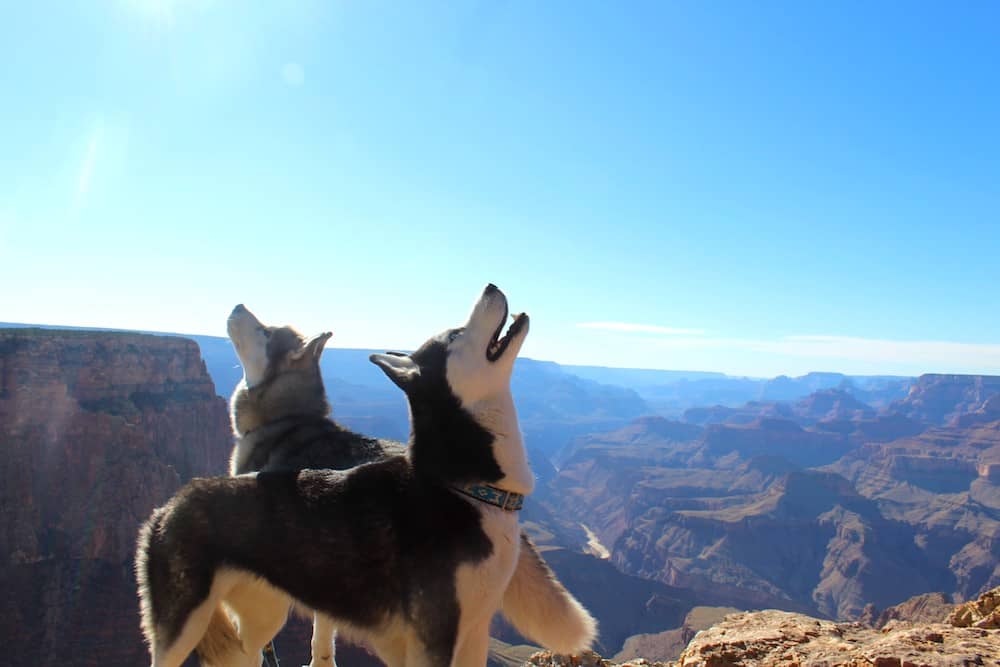 What surprised you the most about traveling with dogs?

During our road trip we didn’t really have much trouble. People were really pleasant – they were fans of the huskies and really amazing, even in Alaska.

Do you plan to travel with your dogs in the future?

Always. We are never without them. Wherever we go, they follow us. We want to show that a dog is not a travel disadvantage, on the contrary. People don’t have to give up their dogs to go on vacation. 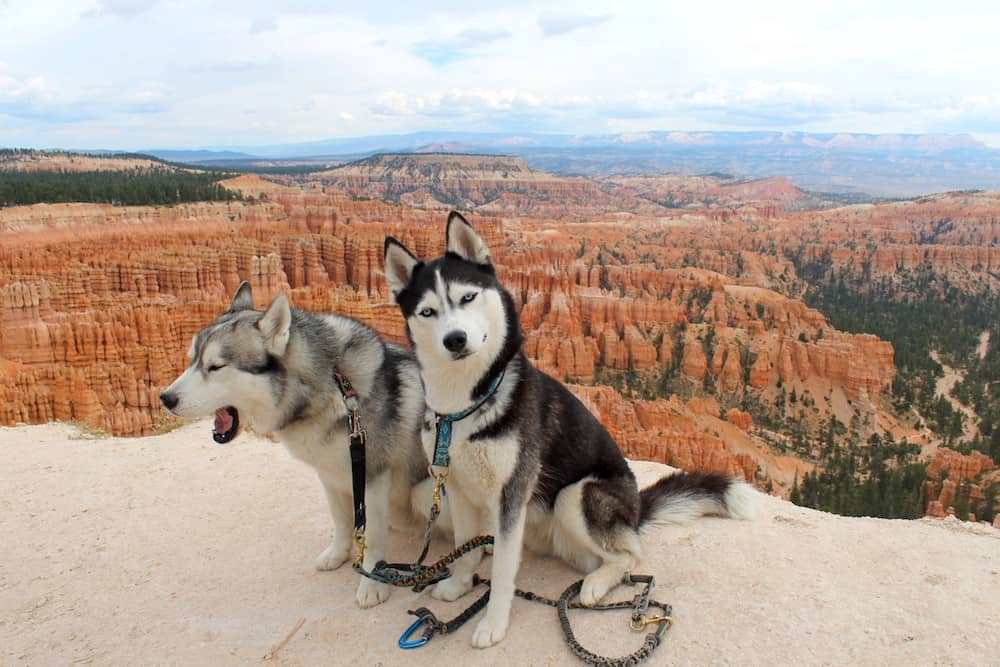 Even when the trip gets stressful, there are magic moments that make it really worth it. Our dogs were so happy to be with us, and it was mutual. We recommend traveling with your dog for at least three weeks to get used to the transition and make the trip cost effective. You just have to start somewhere. 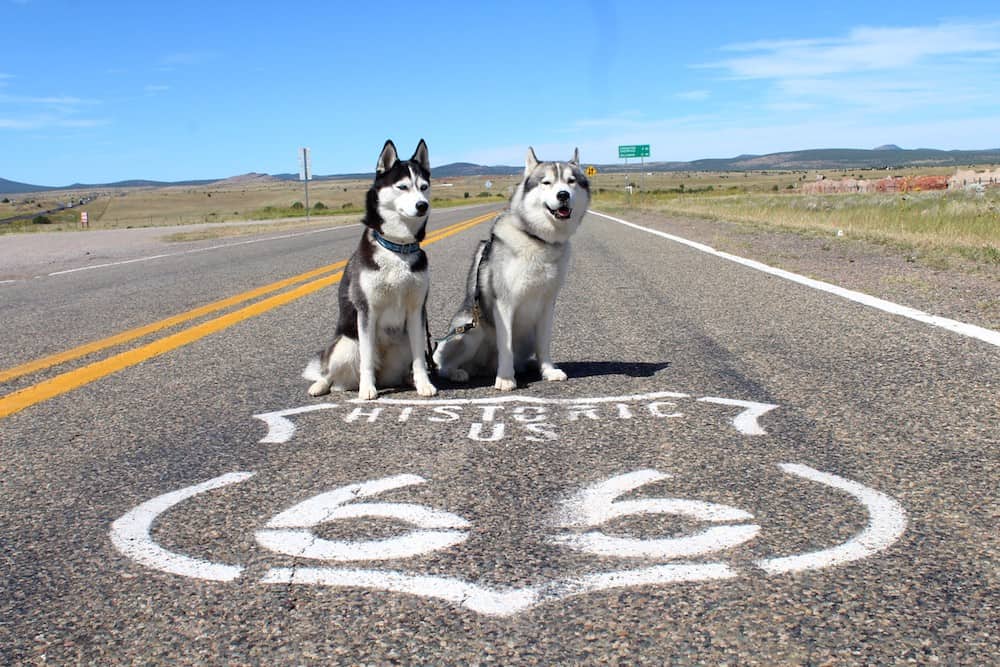 Thank you so much to Laura, Tom, Diablo and Loukia! 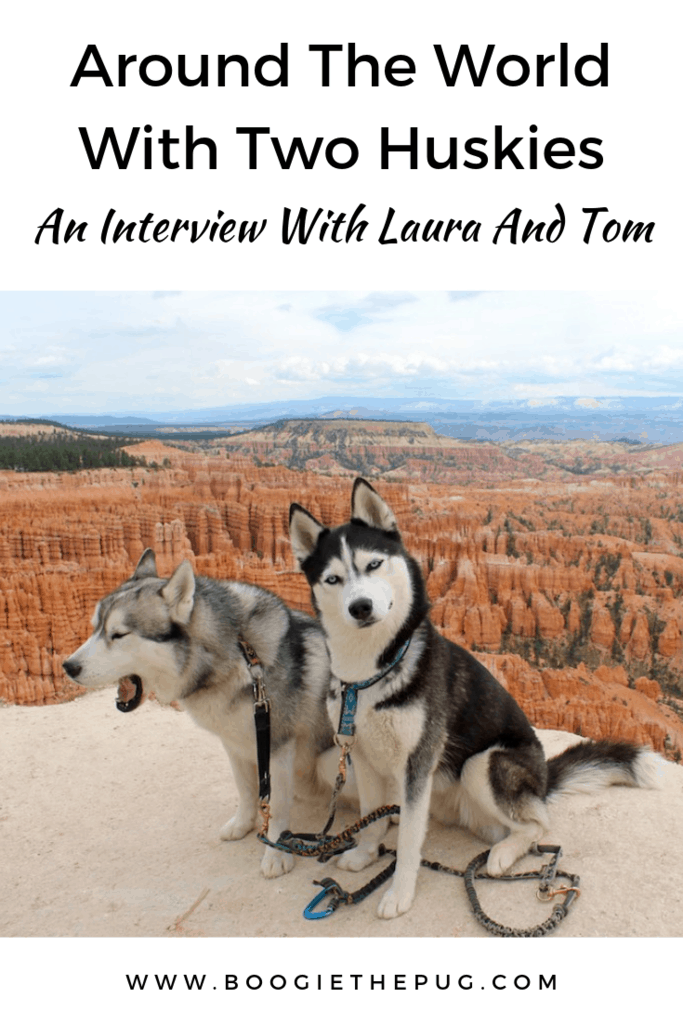 Marcelo and Kitty say you don't want to meet them