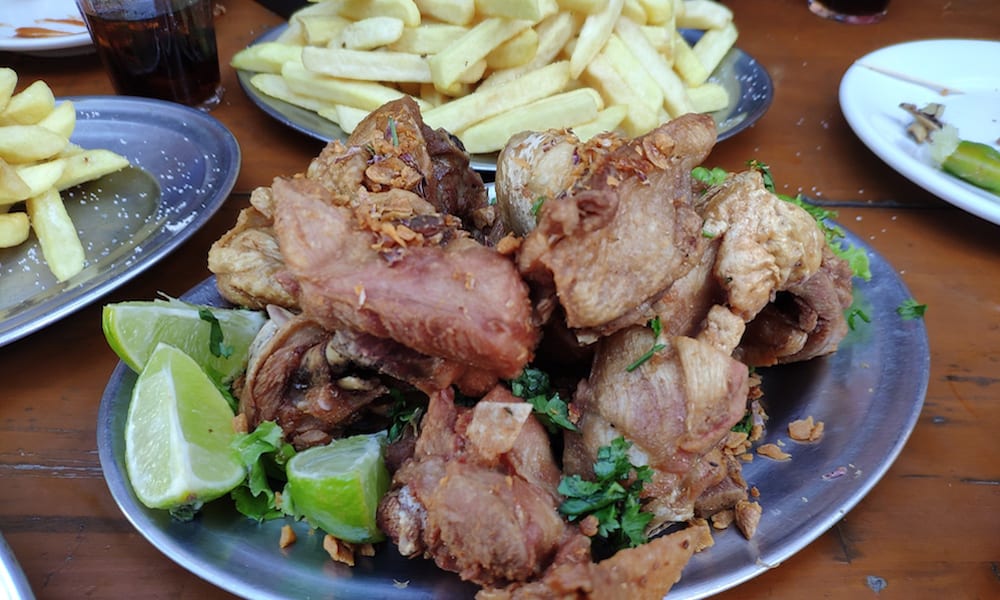 There’s so much to do in Rio de Janeiro that food is often overlooked, which is really too bad. There are so many delicious eats and drinks to try when you visit. We think it’s worth taking a break from the beach to stuff your face with all the tasty, tropical cuisine that Rio has to offer. The food in Rio is delicious, so you certainly won’t be disappointed.

Here’s what to eat when you’re in Rio de Janeiro, Brazil. We’ve thrown in a few popular drinks too! 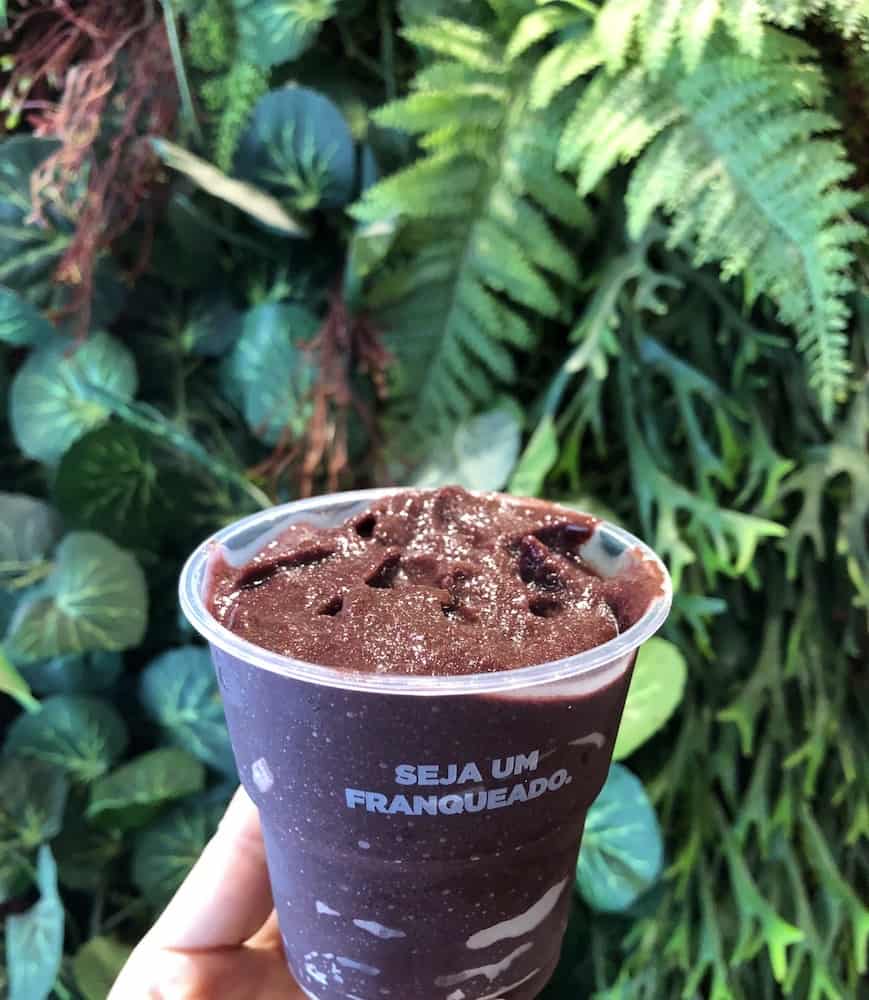 Açaí (pronounced ahh-sah-ee) is a small, round, blackish-purple berry from the Amazon. It’s pretty much a staple food in Brazil, where it’s turned into a powder that’s then blended with ice and sweetened with either guarana (another fruit native to the Amazon) or sugar.

What looks like purple goop Grimace food is actually light and refreshing, and amazing on a hot day (or when you’re suffering from a hangover). You can get it straight, or mixed with fruit and other toppings like granola and tapioca.

You’ll see people of all ages eating it at all hours of the day. It’s sold throughout Rio, in stores, stands and even at the beach. It’s a must try. It’s cheap, so go wild. 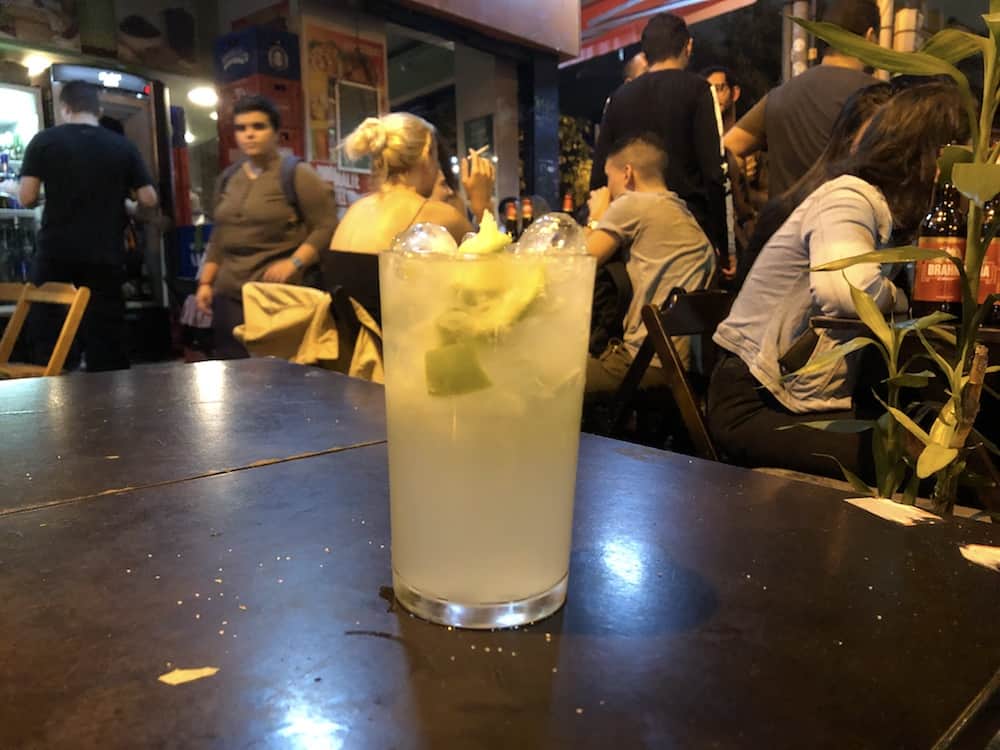 The caipirinha is Brazil’s national cocktail, and with good reason. These drinks are deceivingly strong and refreshingly delicious. An original is made with just three ingredients: lime, cachaça (sugarcane spirit) and sugar. You can also get other flavors of caipirinha, like maracujá (passion fruit) or strawberry. They go down easy, so be careful! 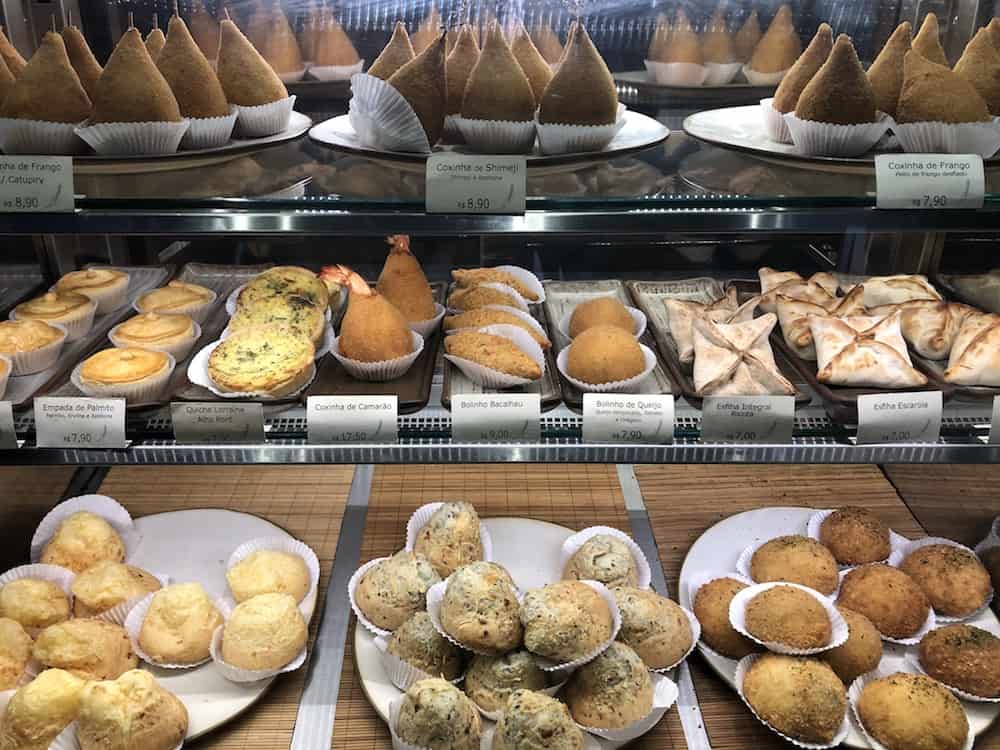 Salgados are savory meat or cheese filled pastries that come either fried or baked.  They’re offered with a variety of fillings, like frango com catipury or ground beef.

Brazilian snack shops, found all around the city, sell salgados, fruit juice, and other bites to eat at all hours of the day. They’re a great snack, especially if you’re on the go and want a quick bite to eat. 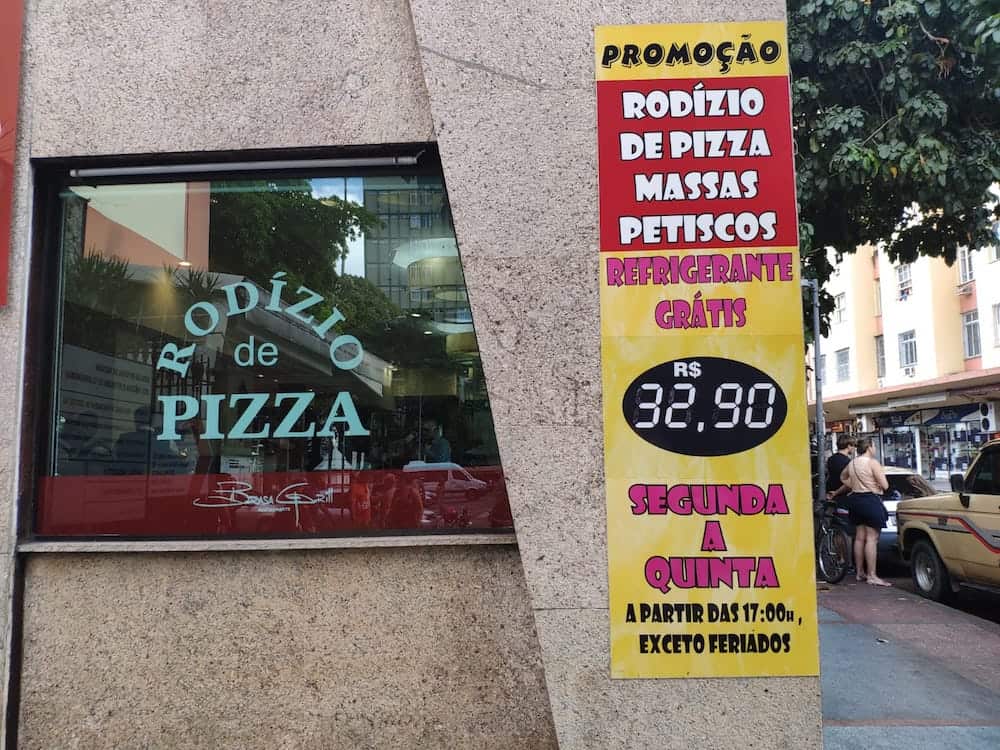 A rodízio is an all-you-can-eat style restaurant, where you pay a fixed price to eat to your stomach’s content.

It goes a little something like this: you’re seated at a table with an empty plate in front of you. Servers bring around different items of food, and you decide whether you want some or not. You eat, and more items are brought to your table to sample. This cycle repeats until your stomach is ready to burst.

The most common type of rodízio is a churrascaria. They serve up different cuts of meat, pork and chicken, often on a skewer and sliced right at your table.

There are other kinds of rodízio in Rio too, like sushi rodízio and my personal favorite, pizza rodízio!

Pizza rodízios have a wide variety of pizzas, with flavors like camarão a Paulista (whole shrimp fried with garlic and lime, with skin and all) and frango com catupiry (chicken with catupiry cheese). Dessert pies are usually available too, baked with chocolate and strawberries, or bananas and cinnamon.

Rodízios are found throughout the city, and they’re a lot of fun! Go with an empty stomach, and be ready to eat a lot of food. 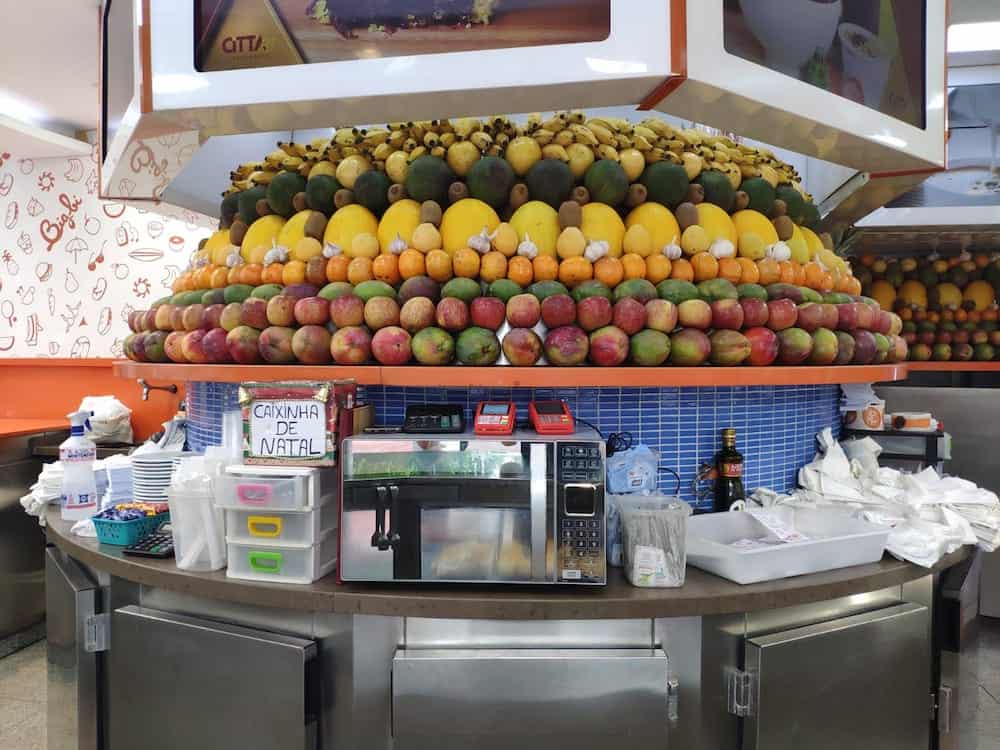 One of my favorite images in Rio (besides the beach of course) is the wall of fruit that most local snack shops have up. Where there’s fruit, there’s juice, and there’s nothing more satisfying than some fresh fruit juice when you’re thirsty.

A variety of fruit juices are offered, either com açúcar or sem açúcar (with or without sugar). You can order a single fruit flavor or a combination.

My favorites include abacaxi com hortelã (pineapple with mint) and passion fruit juice. It’s the tropics, so you’re bound to see interesting fruits you don’t regularly come across at home (have you tried acerola before?). Go nuts! 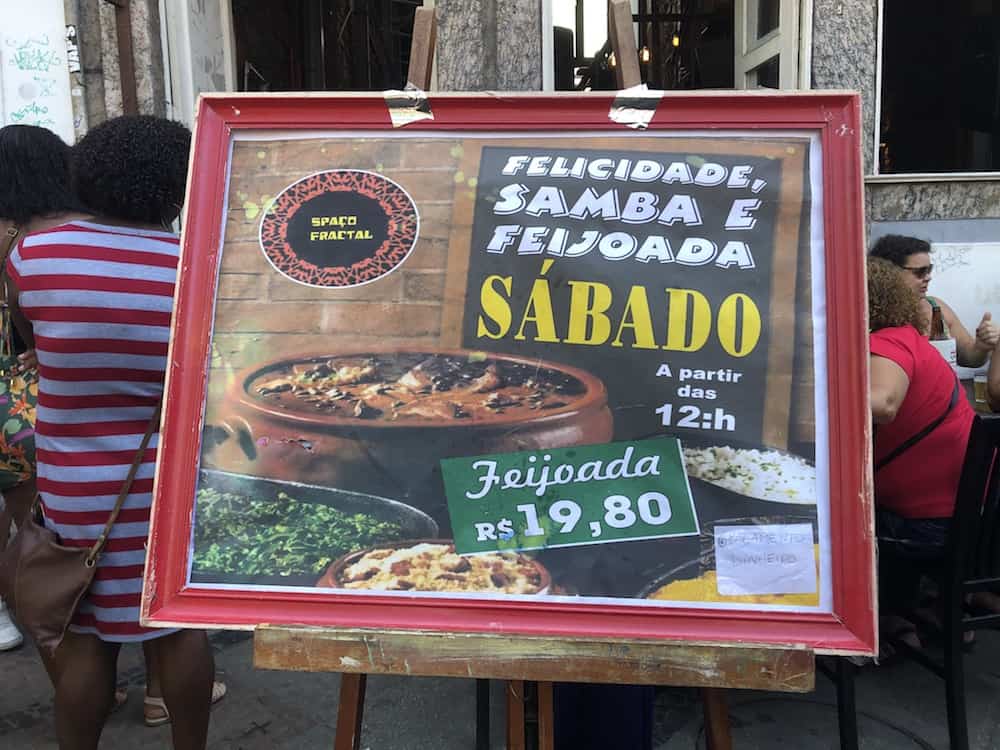 Feijoada is a black bean stew that’s cooked with a medley of meat, like bacon, sausage and rib cut. This popular dish is often considered the national dish of Brazil, and can be found all throughout the country, but especially in Rio de Janeiro.

It’s salty, meaty and hearty, served in a dark black and brownish sauce.

Feijoada is typically enjoyed on the weekend, and many restaurants only have it on either Saturday or Sunday. It’s usually served with rice and farofa (manioc flour cooked with oil and fat). 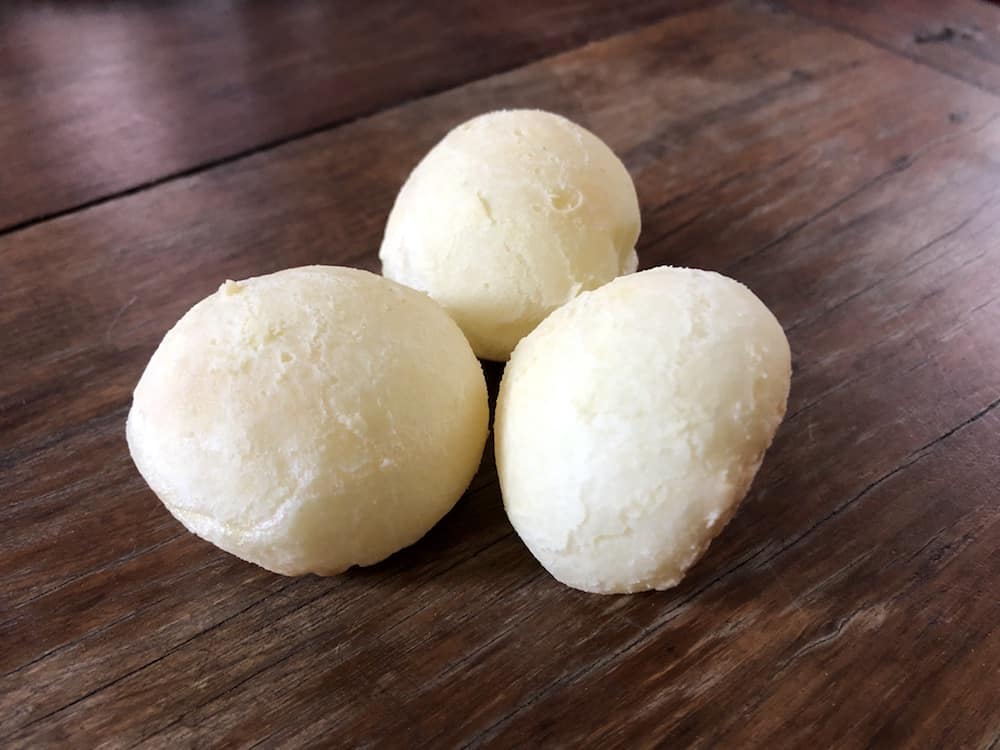 When you think of classic Brazilian food, Pão de Queijo is probably at the top of the list.

Pão de Queijo means cheese bread, and that’s exactly what these small cloud of heaven are. They’re warm, light, and gooey on the inside, with a somewhat elastic texture once you bite into them. They’re made with different kinds of cheeses and manioc flour, so they’re gluten free!

They say the best pão de queijo comes from the state of Minas Gerais, but it’s still pretty good throughout the rest of Brazil. It’s often eaten for breakfast or as a snack, and found in groceries, bakeries and supermarkets, sold both freshly made and frozen to bake at home. 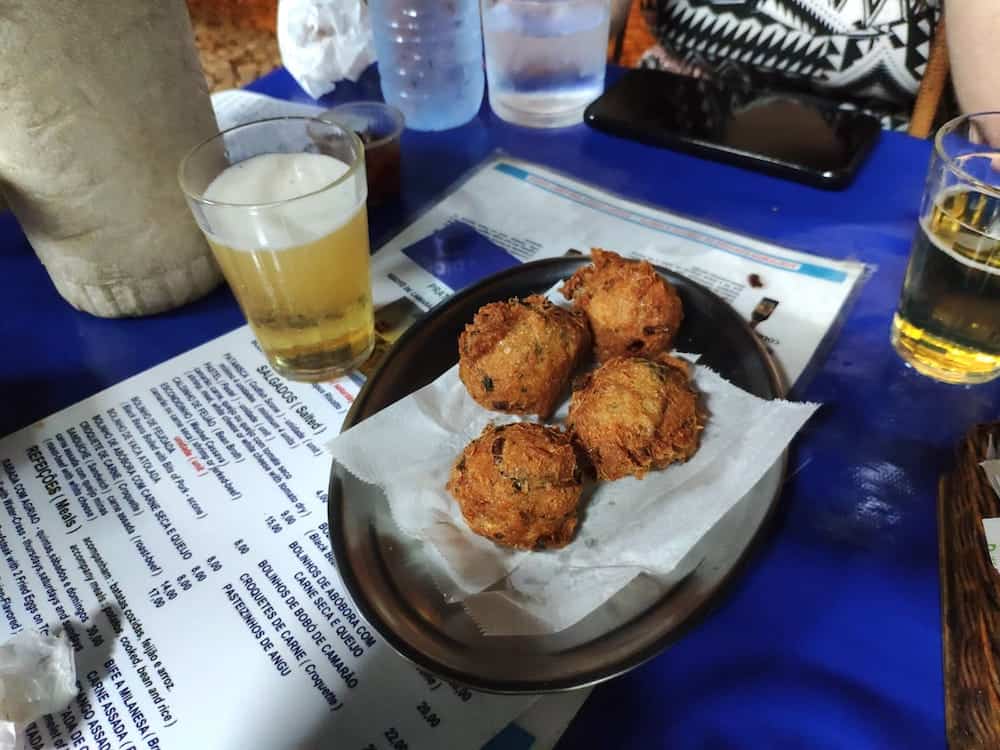 Bolinhos de Bacalhau are cod balls! These round fritters are crispy on the outside and soft on the inside. They’re made with, you guessed it, dried cod, as well as potato, egg and oil. Squeeze a lime or some olive oil over them and devour. Be careful when popping them into your mouth because they’re served hot! 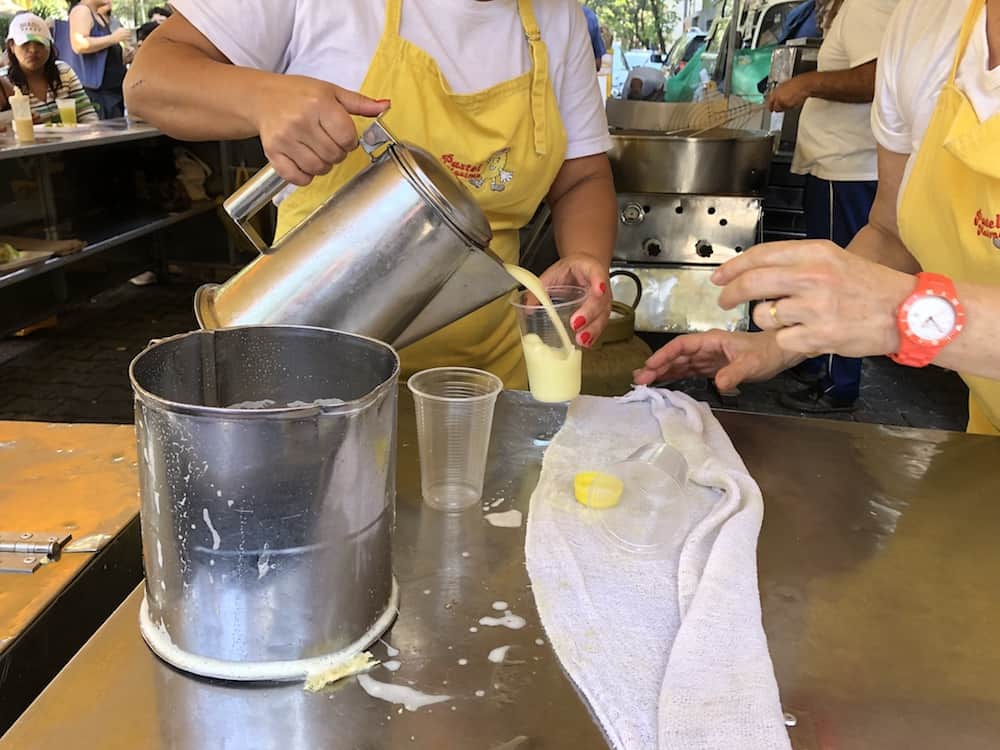 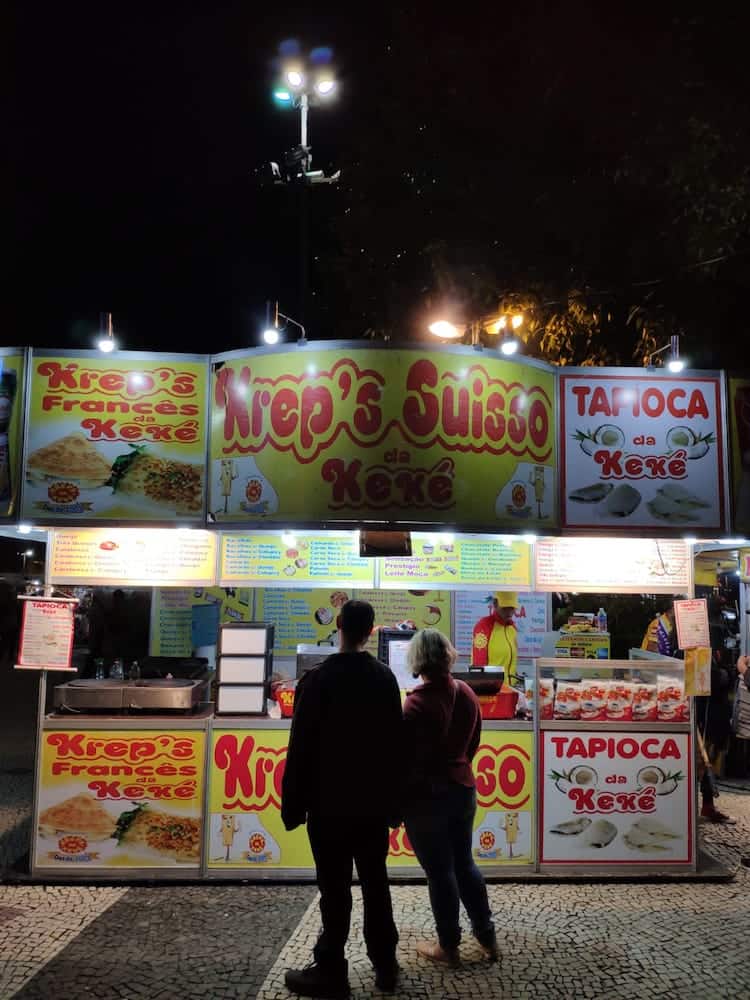 When I think of tapioca, I think of pudding or the balls found in bubble tea. Brazilians do tapioca in a totally different way!

Water is added to tapioca flour and it’s cooked over a flame, usually with a filling. Then it’s folded over, so it sort of looks like a taco with a white shell. They can be served either salty or sweet, with fillings like Nutella and banana or sausage and cheese.

Tapioca is a starch that’s extracted from the cassava plant. It’s often considered a healthy alternative to bread, and used in place of it. 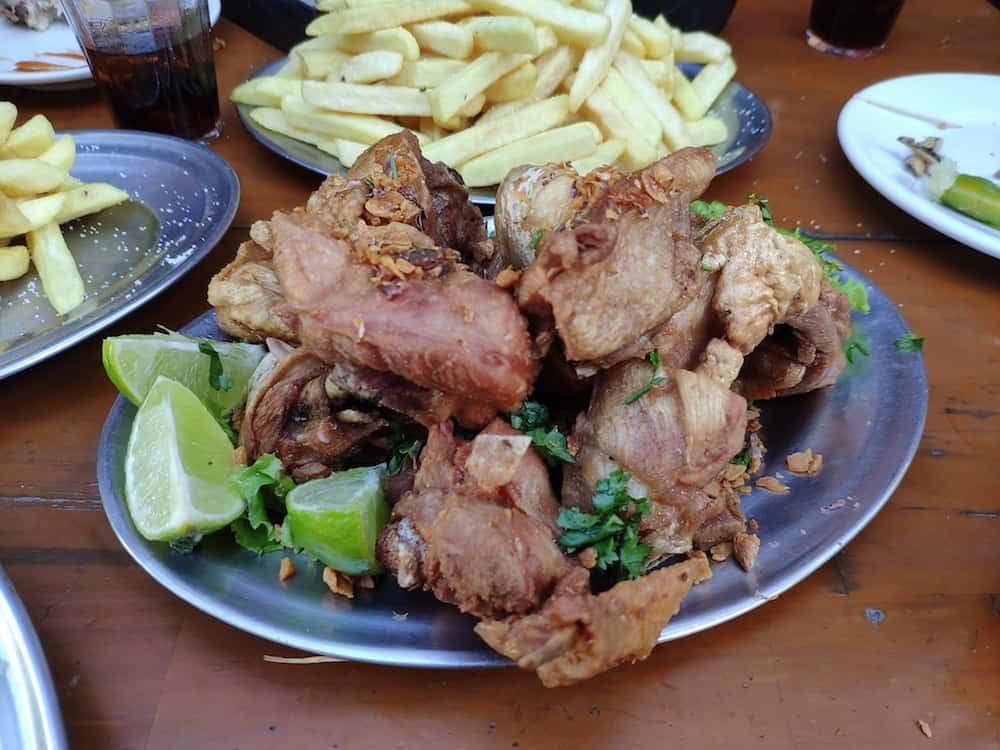 Brazil’s take on fried chicken is known as frango à passarinho. This savory dish features small, two-bite sized pieces of chicken, fried in oil and served with garlic bits and lime. It’s often eaten with your hands, and it makes for great weekend or late night bites (pair it with an ice cold beer!). 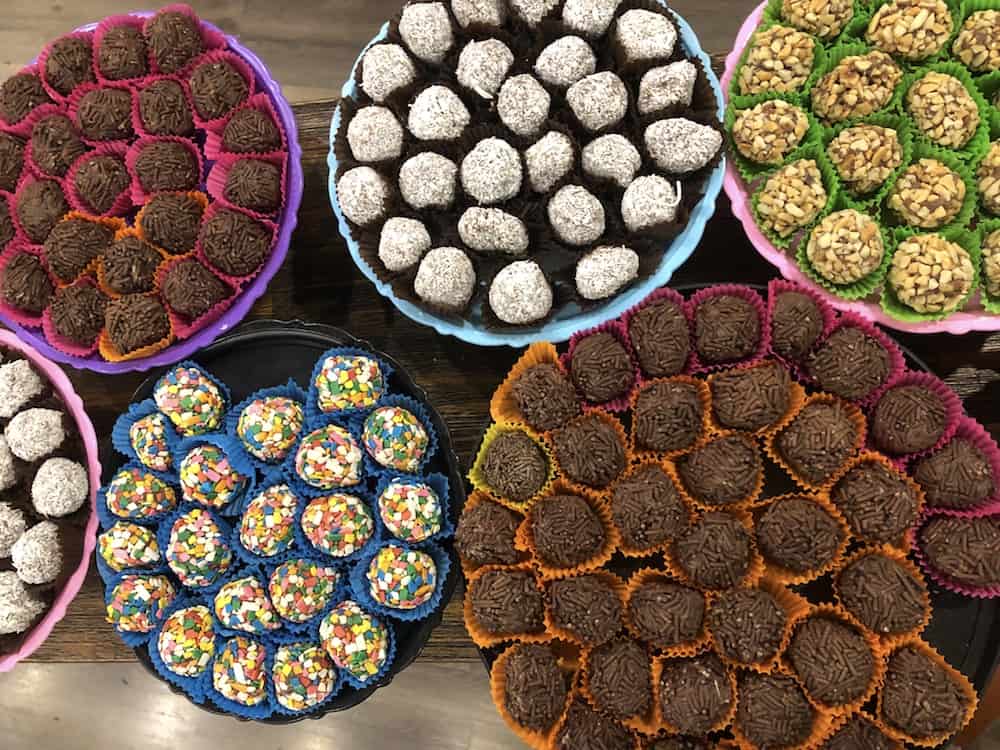 This popular Brazilian dessert can be found at every party, event or bakery. Traditional brigadeiro are small balls made of condensed milk, cocoa powder and butter, and often coated in some kind of topping, like sprinkles or coconut flakes. They’re sweet and decadent, and a must if you’re a chocolate lover. Today, you can find them in other flavors as well, such as lime or coconut.

Fun fact: The name brigadeiro comes from the Brazilian presidential campaign of Brigadier Eduardo Gomes in 1946. One of his supporters created the dessert and named it after the candidate. Gomes lost the election, but his name proudly lives on in sweet infamy.

Do you like Brazilian food? If so, what’s your favorite meal?

Click here for more info on traveling in Brazil. 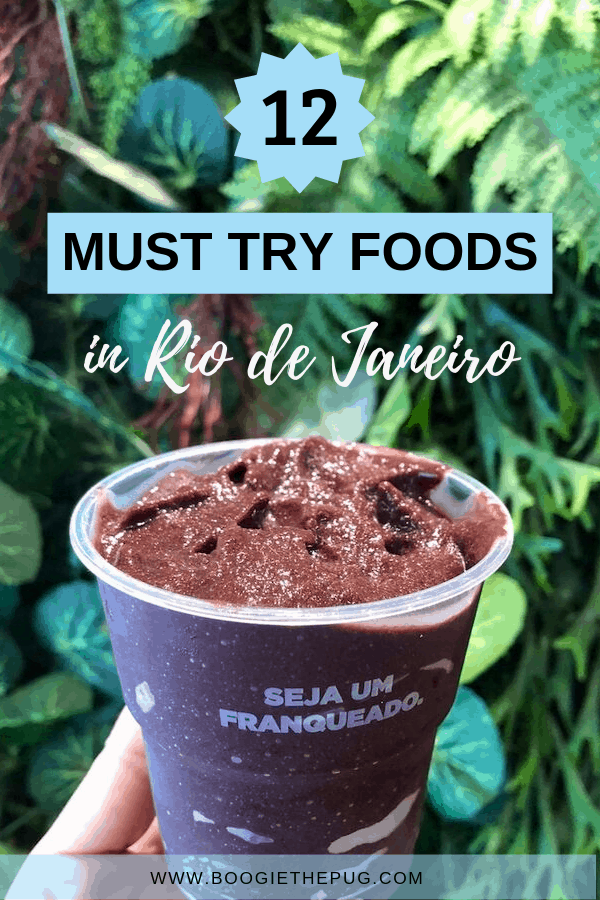 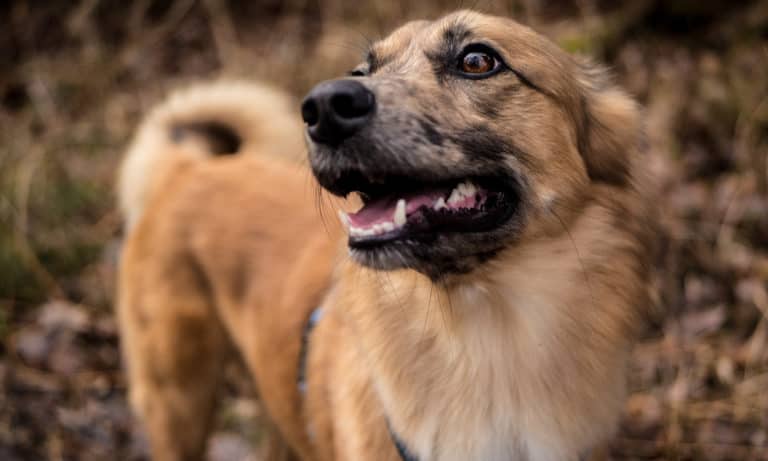 There’s actually plenty of nature tucked into each of the five boroughs where you can hike with your dog and enjoy the scenery. 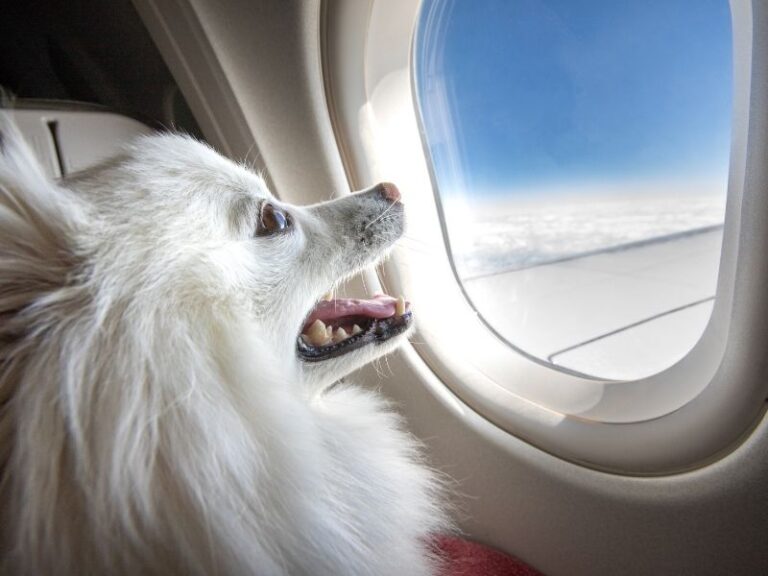 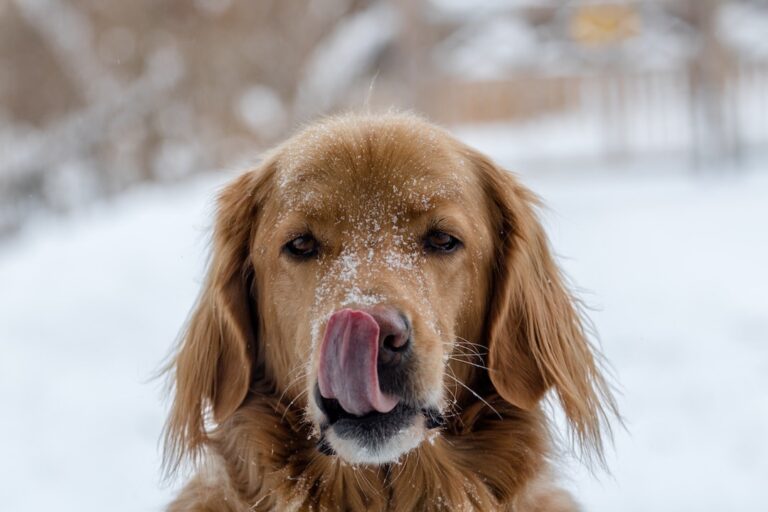 We’ve compiled a list of charming dog-friendly winter weekend getaways from NYC that are all within a few hours’ drive of the city. 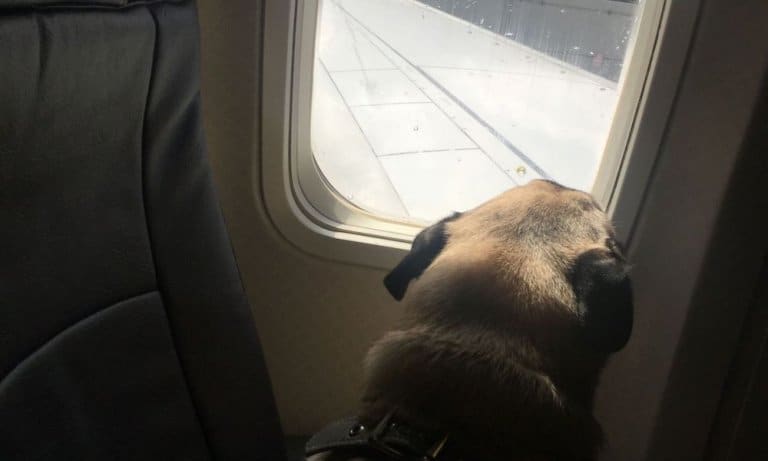 Not all airlines are created equal. When it comes to traveling with your pet, some airlines keep it simple, charging a flat rate, while others complicate things, calculating their fees based on things like weight and destination. It can cost as little as $37 to fly with your pet (traveling within Colombia on Avianca flights)… 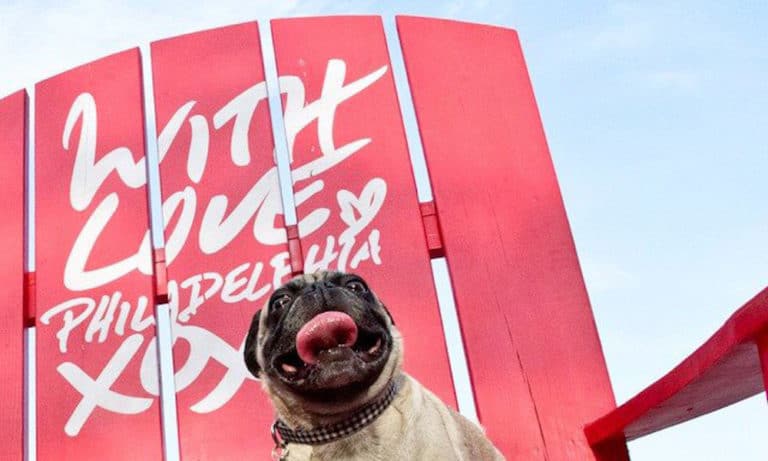 Whether you’re just visiting Philly or a local, it’s great to grab a bite to eat with your pup. Here are 16 dog-friendly places to eat in Philadelphia. 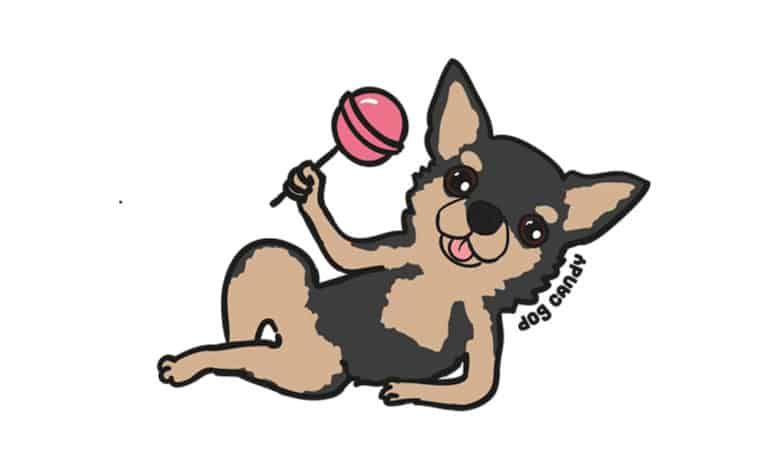 Introducing our new shop Dog Candy, a whimsical dog brand influenced and inspired by our two dogs, Boogie and Marcelo. Take a look!