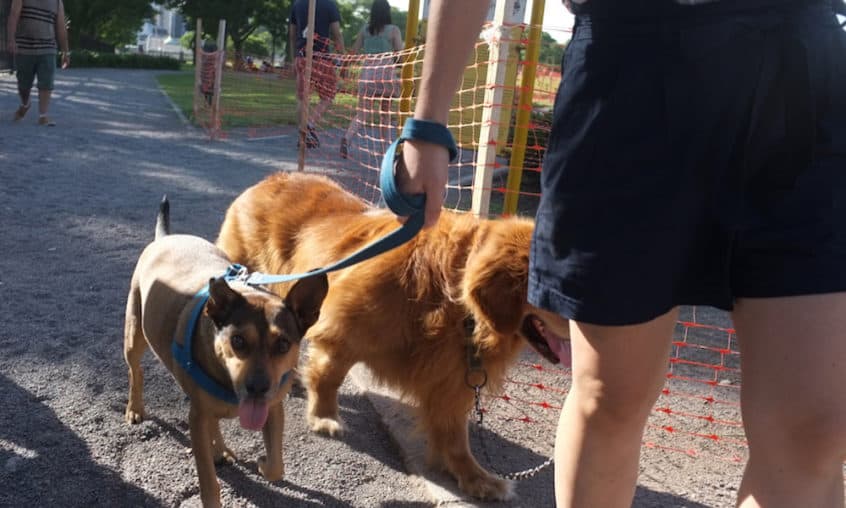 Back in 2006, I spent six months living in Buenos Aires, Argentina. I wanted to study abroad while at Cornell University, and the school had a rule that required students to study in their destination country’s language.

At the time, that meant I was limited to English and Spanish speaking countries. I had already spent two summers in Spain, but had never before been to South America. An ex-boyfriend relayed an interest in Argentina, and voila, I was headed to the capital – Buenos Aires! 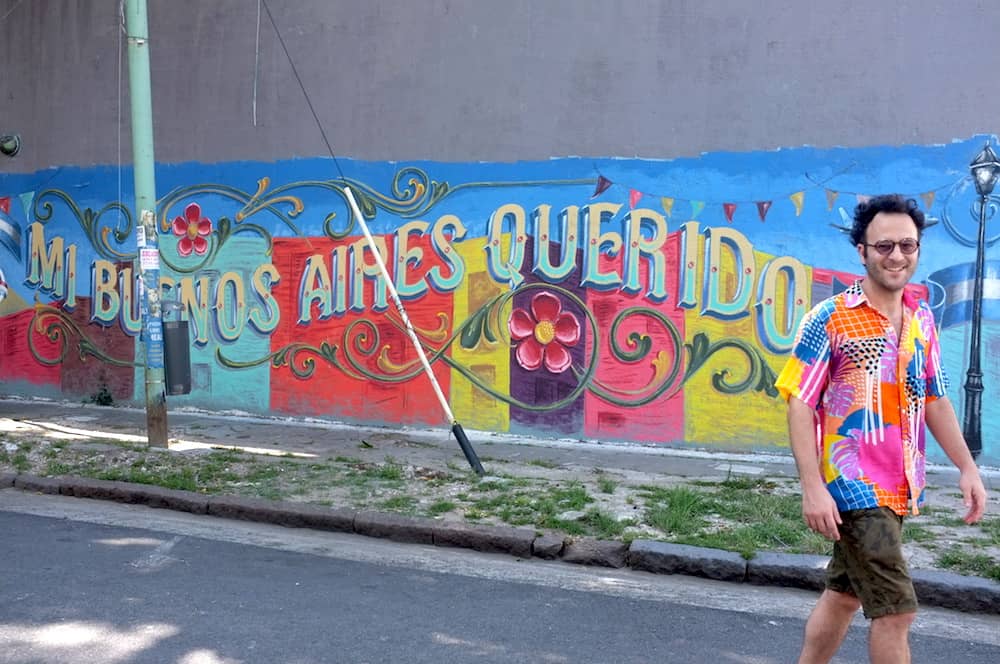 I knew almost nothing about Buenos Aires before I left. I had some vague knowledge about empanadas. I was aware of the fact that they had a good soccer team. And I knew the Porteño accent had a unique shu sound to it. But that was practically it. I was going in blind.

My semester abroad played out like a fairytale. I took college classes in Spanish, lived with a host family, and spent weekends boliche (nightclub) hopping with new friends. It was a hazy introduction to a new place, through a young, college-kid-starry-eyed lens. 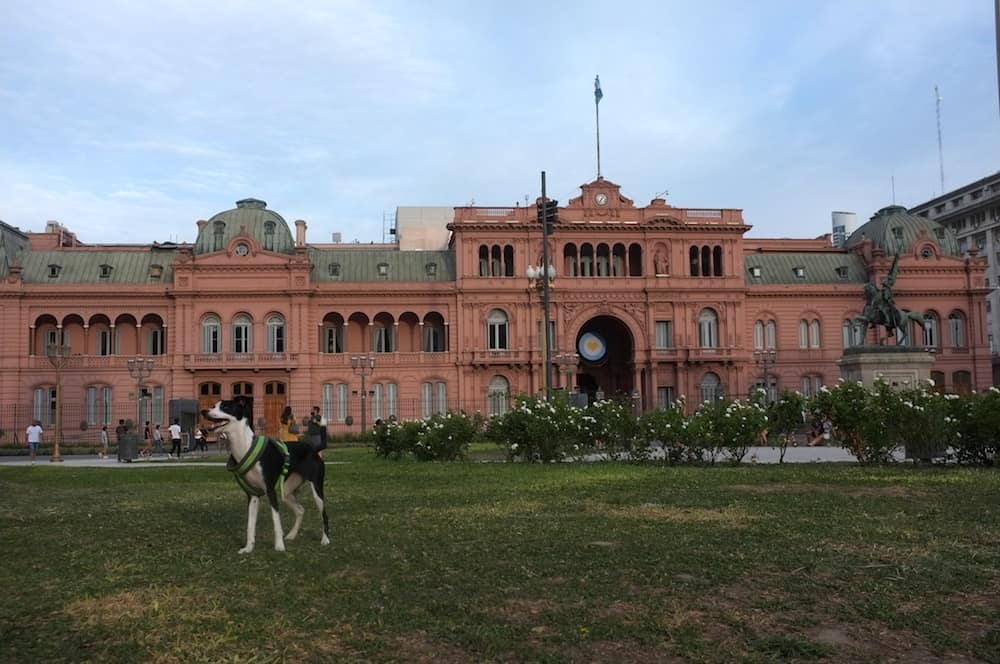 A dog in front of the Casa Rosada.

Along with important life lessons  – why are semesters abroad always so “life changing?” – I also learned more practical information, like how to avoid using the word coger, which means “to take” or “to get” in Guatemalan Spanish (my parents are from Guatemala) but something completely different in Argentinian Spanish (take a guess!).

But besides a quick trip back in 2012, I haven’t returned to Argentina. The city remained fixed in my brain as stuck in 2006,  a time before smartphones, and when I was busy with classes and preferred staying out out all night instead of sleeping.

This time, I’d be less focused on Quilmes and more focused on getting reacquainted with the city.

I was returning to visit a good friend, Ezequiel, and staying in the San Telmo neighborhood.

Argentina has changed a lot over the years. Although the economic situation remains in flux, there is a new president, Alberto Fernández, whose dog has an Instagram account. There are also new pesos to reflect inflation, since five peso notes are basically useless, and the development of new neighborhoods (Puerto Madero wasn’t quite as developed and shiny when I lived there).

It was eye-opening to realize how my view of the city had been so warped. Now, I was armed with Google Maps, and no longer had to rely on the foldout paper map of the city in the back of my Lonely Planet.

This completely changed my perspective of Buenos Aires and its layout, its neighborhoods and landmarks and relation to one another. It seemed smaller now, more manageable, and definitely easier to navigate.

And what about dogs? Oh right, dogs! Because this is a dog travel site, after all.

Back in 2006 I was also dog-less – my host family had no pets – and dog obsessed. And on this more recent trip back, I left Boogie and Marcelo with my partner in Rio. 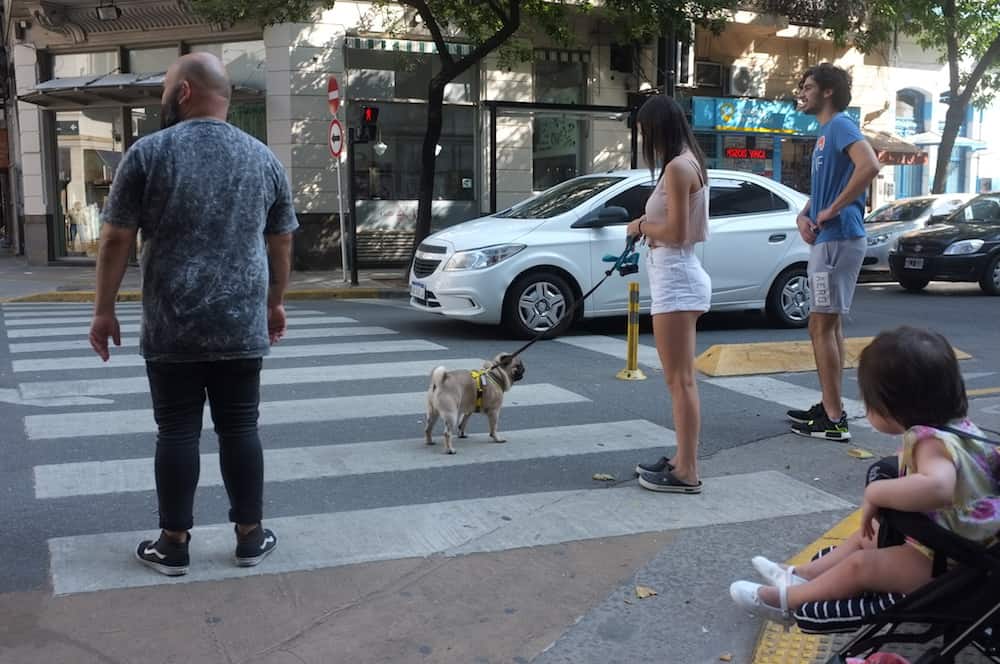 A pug in the neighborhood of Palermo.

Well, what about dogs then? According to a 2018 survey conducted by GfK Group, Argentina has more pets per capita than any other country in the world.

80% of Argentines have at least one pet in their home, and the majority of those domestic animals are dogs. That’s four out of five homes!

I have memories of dodging dog crap on Avenida Santa Fe, the large avenue I lived on back in 2006. At that time, it seemed like the city was covered in feces.

As I wandered the large avenue this time, I was pleasantly surprised to realize there were zero “logs” in sight. I was happy to learn that a city campaign that advocated picking up after your dog had worked. The Hershey Highway was no more! 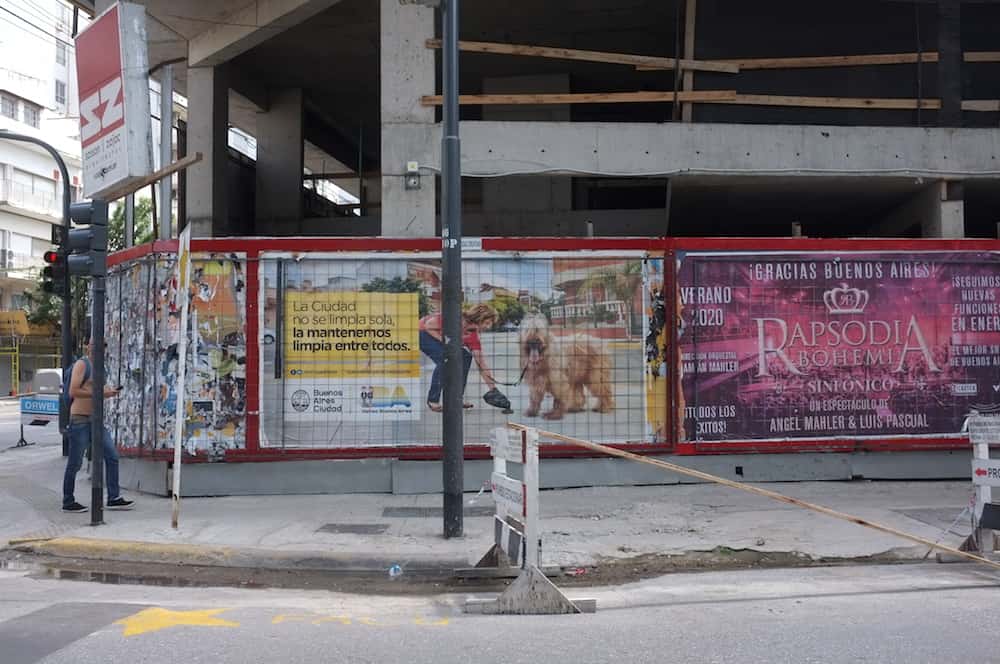 An ad reminding people to pick up after their dogs.

But luckily, the dog walkers were still there.

Buenos Aires has expert dog walkers who somehow manage to walk upwards of twenty dogs at a time. They do it gracefully through crowded streets, as if the dogs were a bunch of balloons stretching towards the sky.

But no, these are real dogs of all sizes that walk in a pack. And the expert dog walkers have them in perfect formation, like a flock of geese in a “flying V.”  It’s like the real life version of my cartoon dream – I can barely walk two at a time let alone this many. 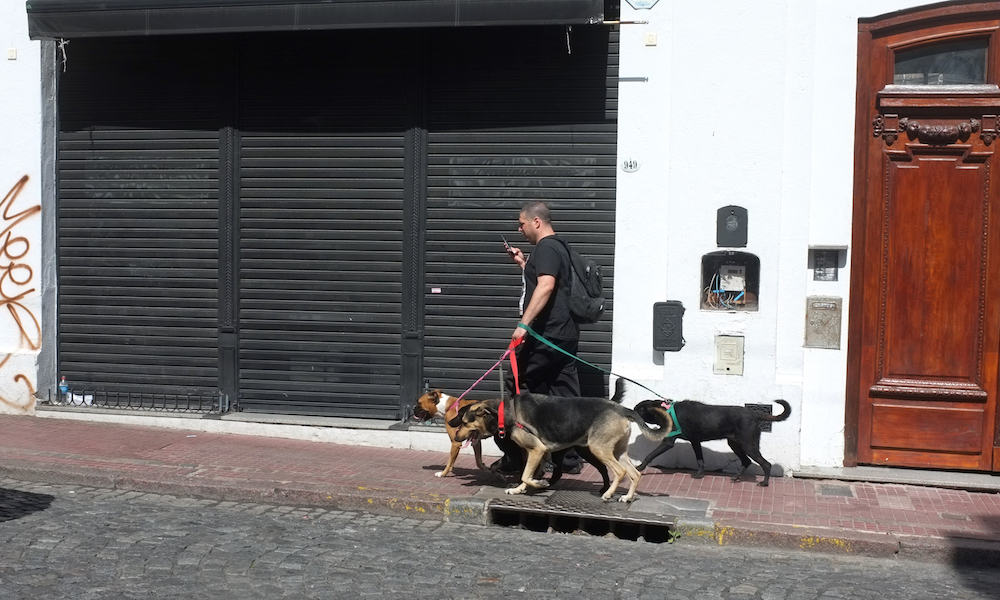 And where to go?

I forgot how many great parks and plazas filled the city. And unlike New York City’s parks, which can get super crowded, there was plenty of space to walk, run and sit, without feeling claustrophobic. Perhaps this was because it was January, a summer month when many Porteños flee the city, or perhaps there’s just enough space to go around. Either way, it was glorious. 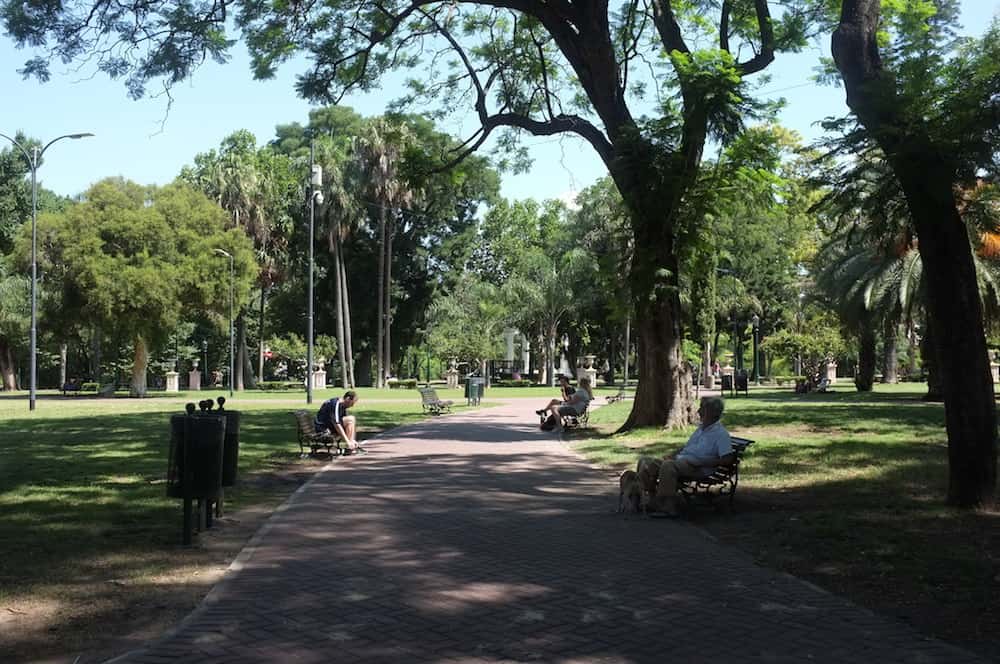 And did I mention the dog parks? I don’t remember them from back in 2006 (did they even exist then?) but now there are dog parks everywhere. There are more than 60 dog parks in fact, all across the city. There’s even a park entirely for pets called Parque Isla de la Paternal, a whole park dedicated to dogs and their owners. 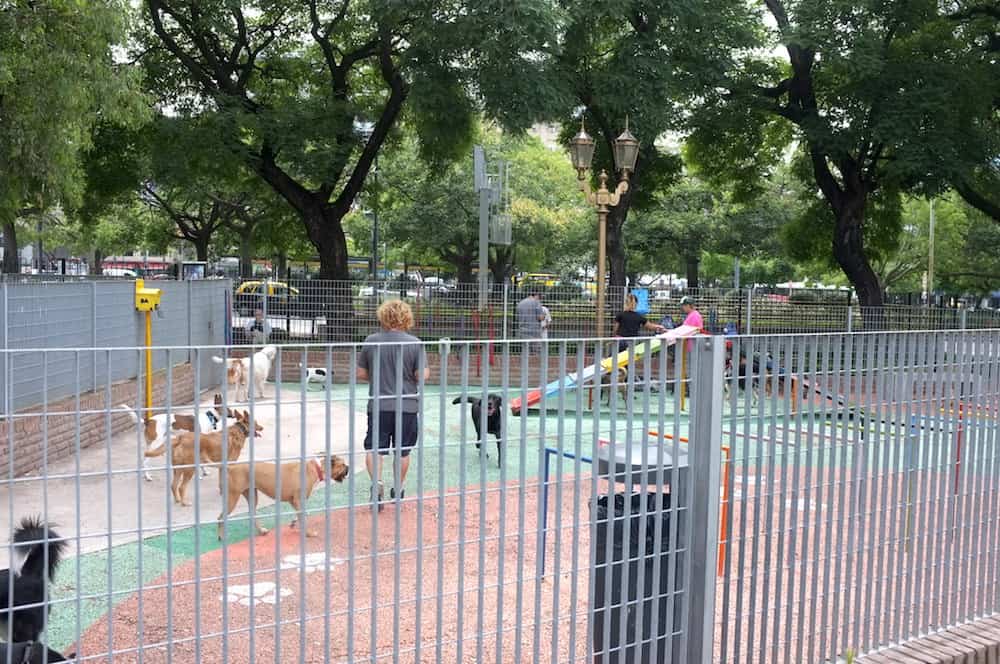 One of over 60 dog parks in the city.

So it turns out that I was dog-less, but not without dogs. Boogie and Marcelo stayed behind, but I was still able to soak up the dog-loving feel of the city. And it was even more magical than I remembered.

Check out my other travelogues: Paraty, Philadelphia. 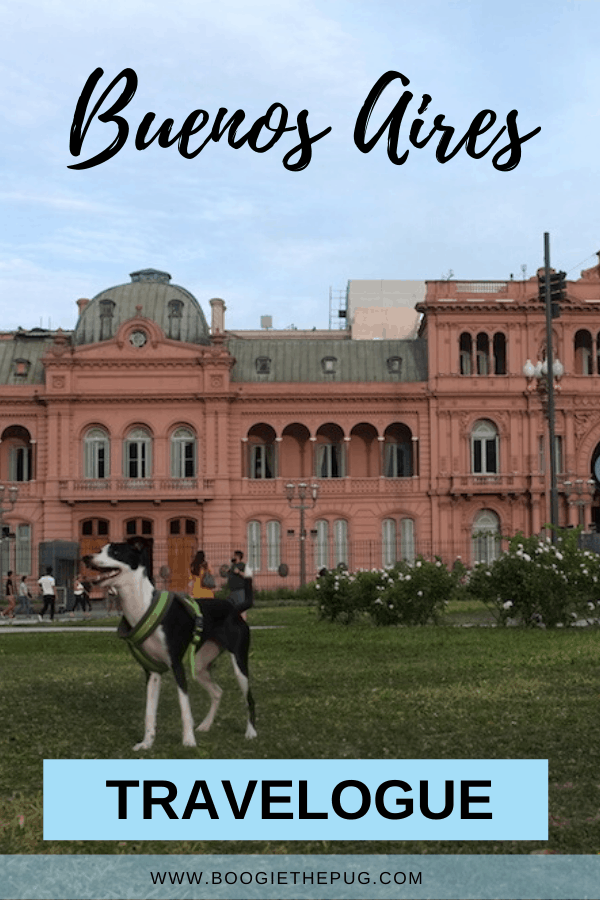 7 Comments on “Travelogue Buenos Aires: Wandering Through the City, Dog-less”