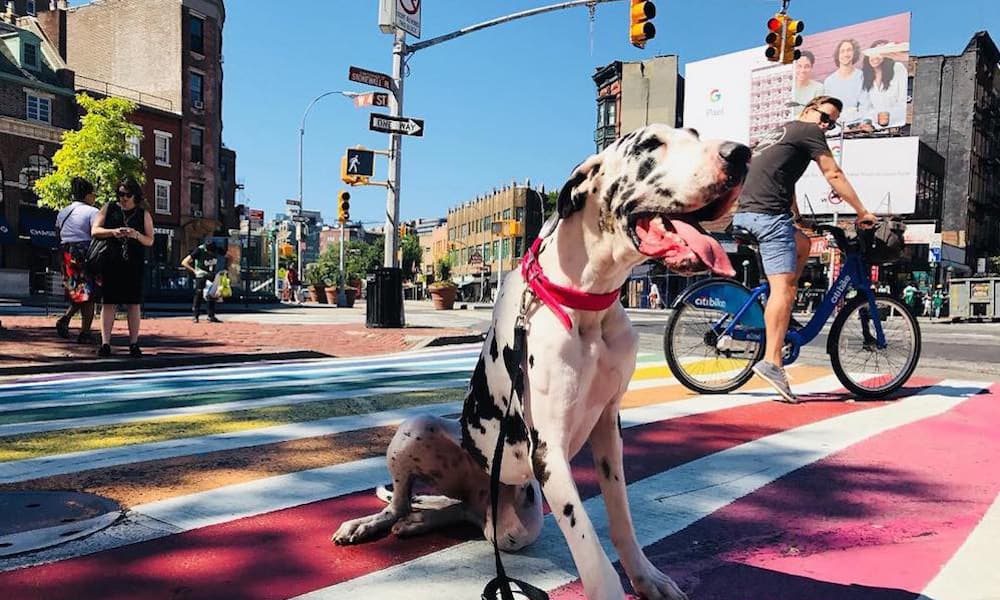 Greenwich Village is one of NYC’s most vibrant and dog-friendly neighborhoods. There’s loads to do, lots to see, and plenty of butts to sniff! Grab your leash, gather your four-legged bff and hit up these dog-friendly locations. Nothing makes for a good day like puppers, pints and parks!

Start your dog crawl off at one of New York City’s best known parks. Named after George Washington, this 9.75-acre public park has everything from children’s play areas to trees and gardens, paths to stroll on, a chess playing areas, park benches, picnic tables and not one, but two dog runs.

The park is always buzzing with activity and a frenetic New York energy that’s contagious. There are musicians playing on benches, sunbathers lounging on lawns and canines frolicking in the dog parks. Pass through the iconic Washington Arch, located on the park’s Fifth Avenue, north side entrance, and dip your paws into the beautiful central fountain.

Fun fact: the area was a former burial ground, and over 20,000 bodies remain entombed under the park to this day.

After all that time in the park, it’s time for a caffeine fix.

Exit on Washington Square South and Macdougal Street, and walk a block and a half  to the legendary Caffe Reggio.

This New York City establishment first opened in 1927, and is Greenwich Village’s oldest coffeehouse. A relic from old New York cafe society, it’s also said to have been the first spot to serve cappuccinos in New York when the owner imported an espresso machine all the way from Italy. That machine, made in 1902, is still housed in the same spot to this day.

Besides its coffee fame, Caffe Reggio is a big part of New York history in a few other ways. It’s featured in classic New York films like The Godfather II, and was the site of a speech made by then Presidential hopeful John F. Kennedy in 1959.

Grab a seat outside and choose from one of their famous cappuccinos, or a different hot, steamy, caffeine filled treat (espressos, lattes, and macchiatos, oh my!).

Just around the corner, you’ll find the intersection of Minetta Lane and Minetta Street.

Back in the 1800s, this area was known as “Little Africa” because it was home to a large African-American population. Minetta Street was initially just a narrow path that followed a small tributary stream, known locally as “Minetta,” that flowed into the Hudson River. Minetta Street today is thus curved in a way that defies the tradition of New York’s grid pattern.

Walk along this charming street and you’ll find an oasis of quiet and quaint buildings nestled right in middle of the bustling city. The stream has long been paved over, but you can still follow it’s crooked and picturesque route.

Next, walk west and through James J. Walker Park. What was once a former burial ground (with over 10,000 burials!) is now a public park, with baseball fields, bocce courts, playgrounds, bathrooms, handball courts and a memorial dedicated to deceased firefighters.

Don’t miss the amazing street art on the corner of Clarkson Street and Hudson Street. It’s worth a look!

Next, head west to Hudson River Park and the Leroy Street Dog Park for some off leash play.

This scenic park is run by the Leroy Dog Run Association, a group of dedicated local dog owners who keep the park clean and safe.

It has a built in pool, colorful hard surface flooring, benches, trees for shade and trash cans. It’s a great place to socialize and hang out with local pups.

Walk north along the Hudson, pass the sunbathing at Pier 45 and the beautiful Marsha P. Johnson Memorial Fountain, and you’ll hit Pier 46.

Next, head east and pop into Beasty Feast, a charming pet store only a block away.

This family-run mom and pop shop has been in the pet business for over 30 years, so you know you’re in good hands.

Pick up some extra poop bags, and maybe a new dog carrier, since your pup will likely be winded from so much pup fest fun.

By now, your stomach’s growling and it’s time to get some grub. Continue up Charles street and head east and you’ll hit La Contenta Oeste.

This Mexican eatery caters to our canine amigos with their own doggy menu.

Give your dog a taste of Mexico with dishes like Pollito Con Papas (poached chicken breast with roasted carrots and potatoes) and El Vegetariano (quinoa, rice, sweet potatoes and carrots).

While they’re chowing down, treat yourself to some guacamole and chips, fish tacos and one of their signature cocktails (we recommend The Mayan or one of their Micheladas).

**BONUS: If you present your pup fest swag at La Contenta Oeste you’ll get a free slider!

The jovial atmosphere attracts an eclectic crowd, most of whom come for the music, and to play games like chess, backgammon and scrabble. It’s an adult playground!

Grab a booth with your dog and enjoy a round and a game.

For our last stop, give in to your end-of-the-night munchies and head south to Milk & Cookies Bakery. Your pup will know where you’re headed because you can smell the cookies baking from all the way down the block. Yum!

For pups, try out their Peanut Butter Pumpkin Dog Treats, made with whole wheat flour, pumpkin puree and peanut butter. They’ll get your dog’s tail wagging.

Hudson River Park has a popular and scenic bike path that runs along the water. 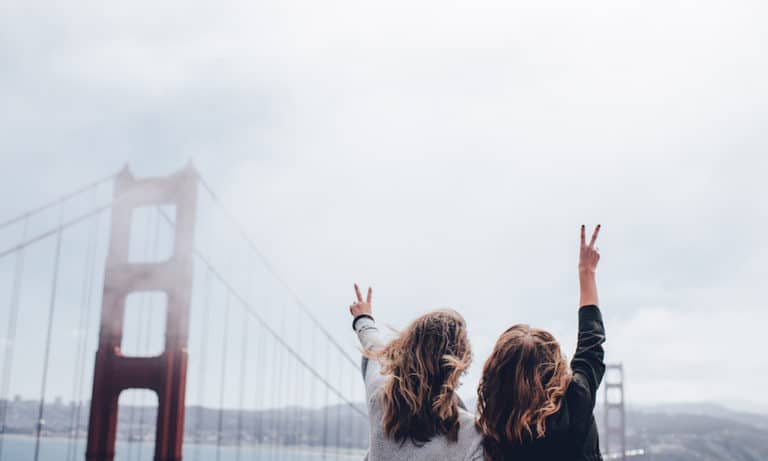 The truth is that travel, whether by plane, boat, or car is not exactly green. Here are ways you can help the environment when traveling with your pet. 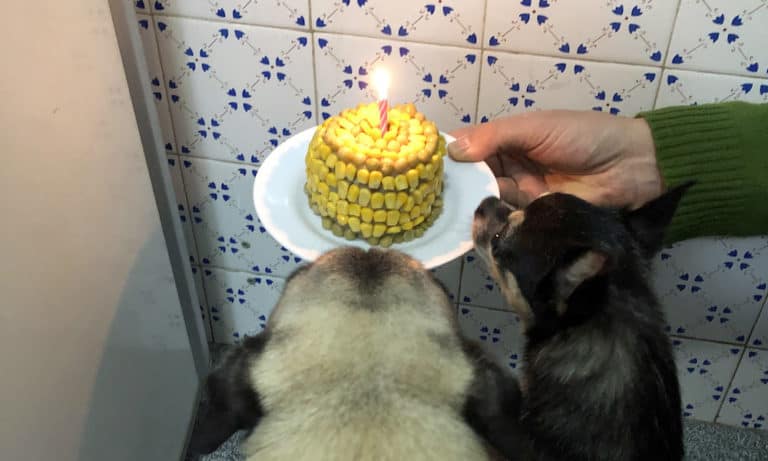 This homemade dog birthday cake will make your dogs mouth water! It’s easy to make and healthy, so you won’t feel guilty about serving them cake for dinner. 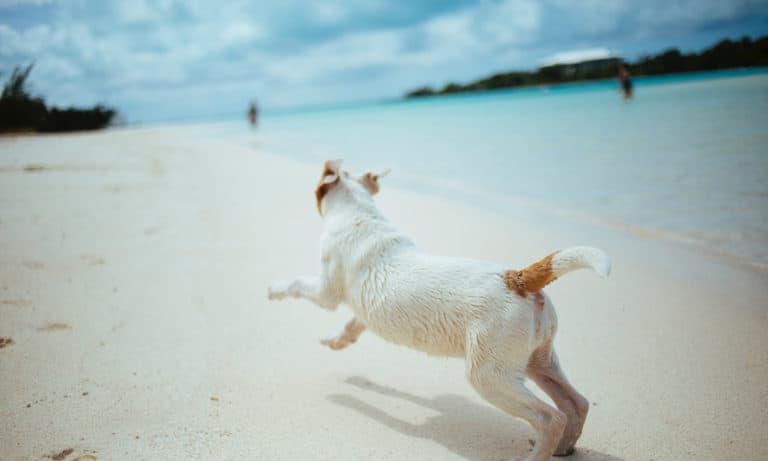 No summer is complete without a trip to the beach. Bring your dog along and keep the following in mind before you hit the shore. 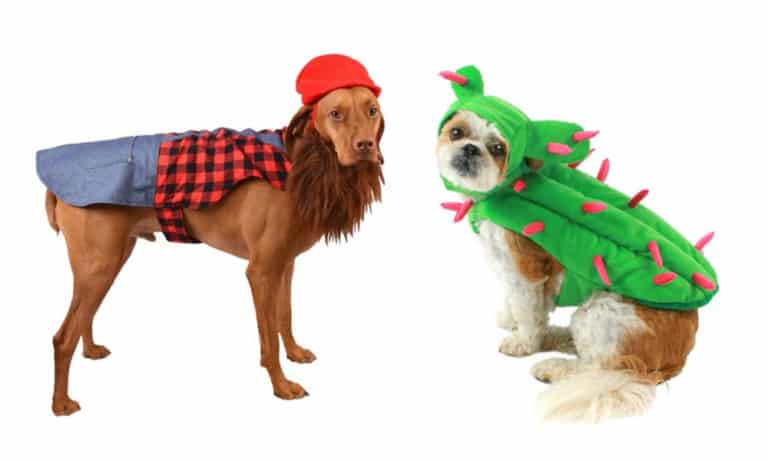 Halloween is a pups time to shine! It’s a holiday meant for dogs. Here are dog Halloween costume ideas to match every type of dog owner. 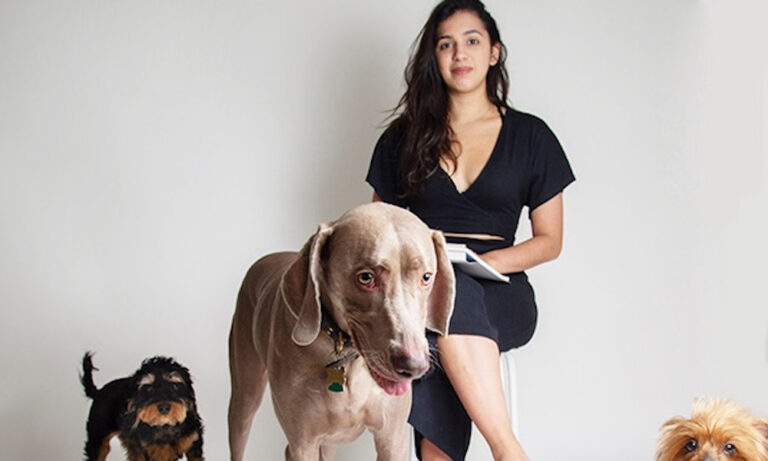 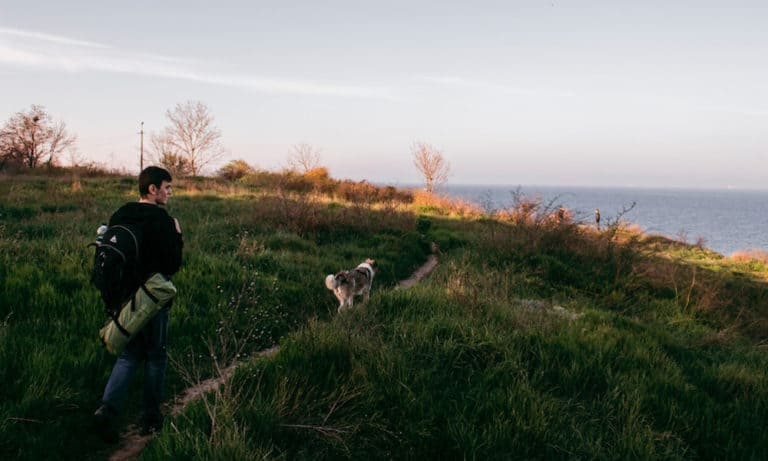 If you’re planning an internationl trip with your dog then you’ll want to read this. Here’s the most annoying thing about international pet travel.